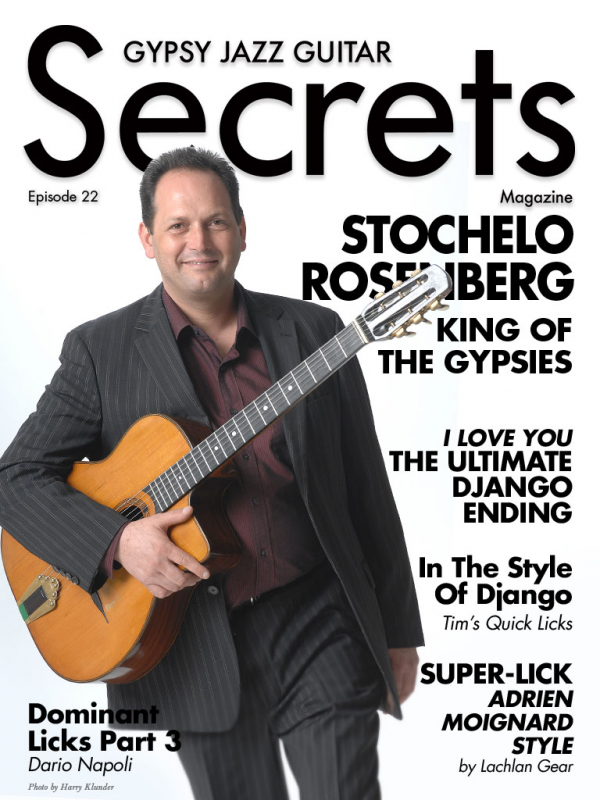 Stochelo Rosenberg King Of The Gypsies
"Stochelo Rosenberg has for a long time been undoubtedly one of the most popular and revered guitarist on the international gypsy jazz scene. He has played a major part in bringing Django Reinhardt’s music to a large global audience with his famous group The Rosenberg Trio and inspired countless guitarists on their journey to play Django’s music. Not only that but he invented the Rosenberg sound that is now known, loved and emulated among the gypsy jazz community. His signature vibrato, impeccable technique and mastery of Django Reinhardt’s repertoire make him the world class and special guitarist he is today."
Dario's Dominant Licks Part 3 - Video Lesson
Here’s a ready-to-go, hip and bite size 2-5-1 lick in D major
Adrien Moignard Altered Lick - Video Lesson
Welcome to my new column in Secrets where each month I show you how to use some cool licks from some of the world's great jazz musicians in your gypsy jazz playing. This time I’ve got a lick inspired by one of my favourite guitarists Adrien Moignard. He’s one of the best modern gypsy jazz players in the world and this lick sounds wicked.
Django's Tiger - Paulus Schafer and Feigli Prisor
This is the raw gypsy style way of playing! Full of charm and awesome guitar picking, this is how the gypsies play Django’s music. Paulus Schafer and Feigli Prisor are Dutch gypsies who were at the Django Reinhardt festival in Samois-Sur-Seine along with thousands of other gypsy jazz fans to celebrate our hero's life and music.
Djangoesque - Tim's Quick Licks - Video Lesson
This is a great lick to use in tunes like “Minor Swing”, “Anniversary Song” and “Joseph, Joseph”
Irene's Gypsy Jazz Adventures
About what struck me, touched me, made me laugh or left me in awe while dancing around with my guitar, my camera and my drawing pad in the international world of gypsy jazz.
I Love You - The Epic Django Ending
In the sample issue this month, I showed you a cool intro for ‘I Love You’. In this lesson we’re going to learn my favorite ending ever in gypsy jazz!

Tap below for more from Gypsy Jazz Guitar Secrets Magazine